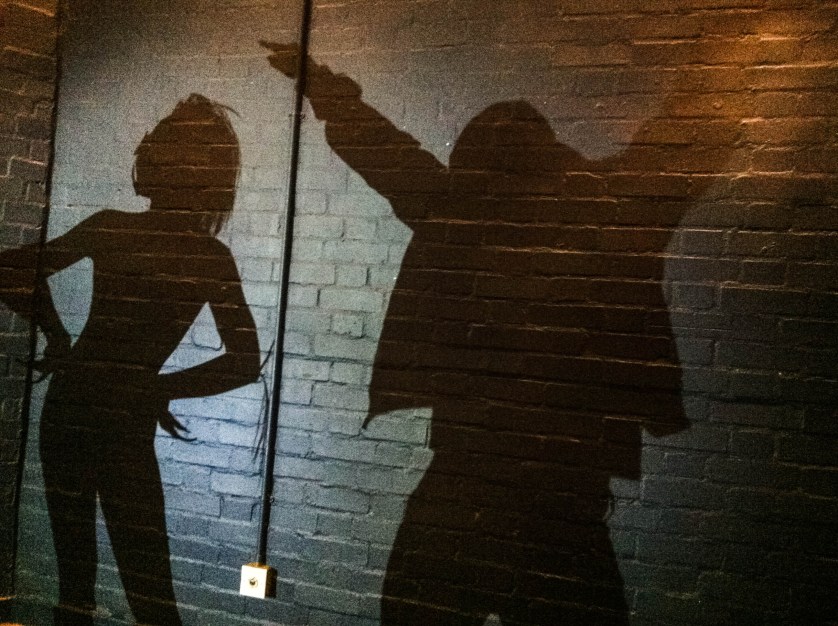 How we felt when we saw our film

“…as I was watching the finished film with the mountain of kit around me and saw the perfect blend of physical and digital effects thanks to a leaf blower and some digital lightning sorcery at the climax of our film, I came to the conclusion that there is definitely value in these film challenges and angry pigs could not hold me back from doing another.”

With 48 hours behind us and two car-loads of equipment successfully decamped from the two Travel Lodge rooms, the five of us slumped down amongst the kit mountain outside of the lobby and watched our film for the first time.

We had spent the last two days working on this practically non-stop with a frantic mad scramble in post production right up to the very last second to get it completed and finished in time, but none of us had actually seen it all the way through. Even those primarily responsible for the editing had absolutely no idea whether it would hang together properly.

Whilst it felt incredibly rock-and-roll to have submitted a film to the Sci-Fi London 48 Hour Film Challenge practically blind, it was more than a little nail biting to hit play. Would everything be in the right place? Would the sound sync up with the video? Would the effects have rendered properly? Did we accidentally use that shot where after hitting the clapper board I got confused, ran into shot, out of shot and then in a small little panicked circle into the shot again?

The feeling of euphoria that not only did everything hold together really well but that it was probably the best short film we had produced as a team was overwhelming. Thrusting my hands up into the air I immediately forgot how to lower them and in a stunned state of sleep deprivation and happiness, all of us could barely comprehend what the Tortoisebutler crew had managed to pull off this time.

Lets do something simple this year

A lot of film challenges start with one of us saying something along the lines of “let’s do something simple this year” because most of us remember trying to film a five minute steampunk version of the Matrix. 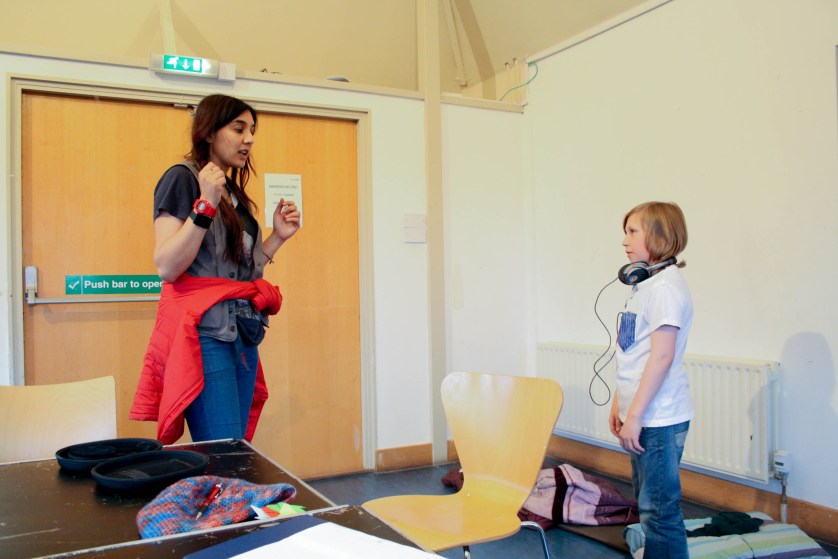 “Do you think you can be an adorable defence drone?” “Sure.”

It’s an excellent idea. A lot of the more successful entries to film challenges tend to be simple ideas that are well executed and well polished. A few beautiful shots with a subtle plinky plinky melancholy piano track underneath followed by some kind of twist that they were clones all along. Unfortunately, that sort of artsy approach doesn’t seem to appeal to any of us on the crew when it comes to making our own films. We have a few themes that we tend to revisit, such as time travel and robots and we have a slight tendency towards plots with a couple too many twists and turns than is reasonably filmable. 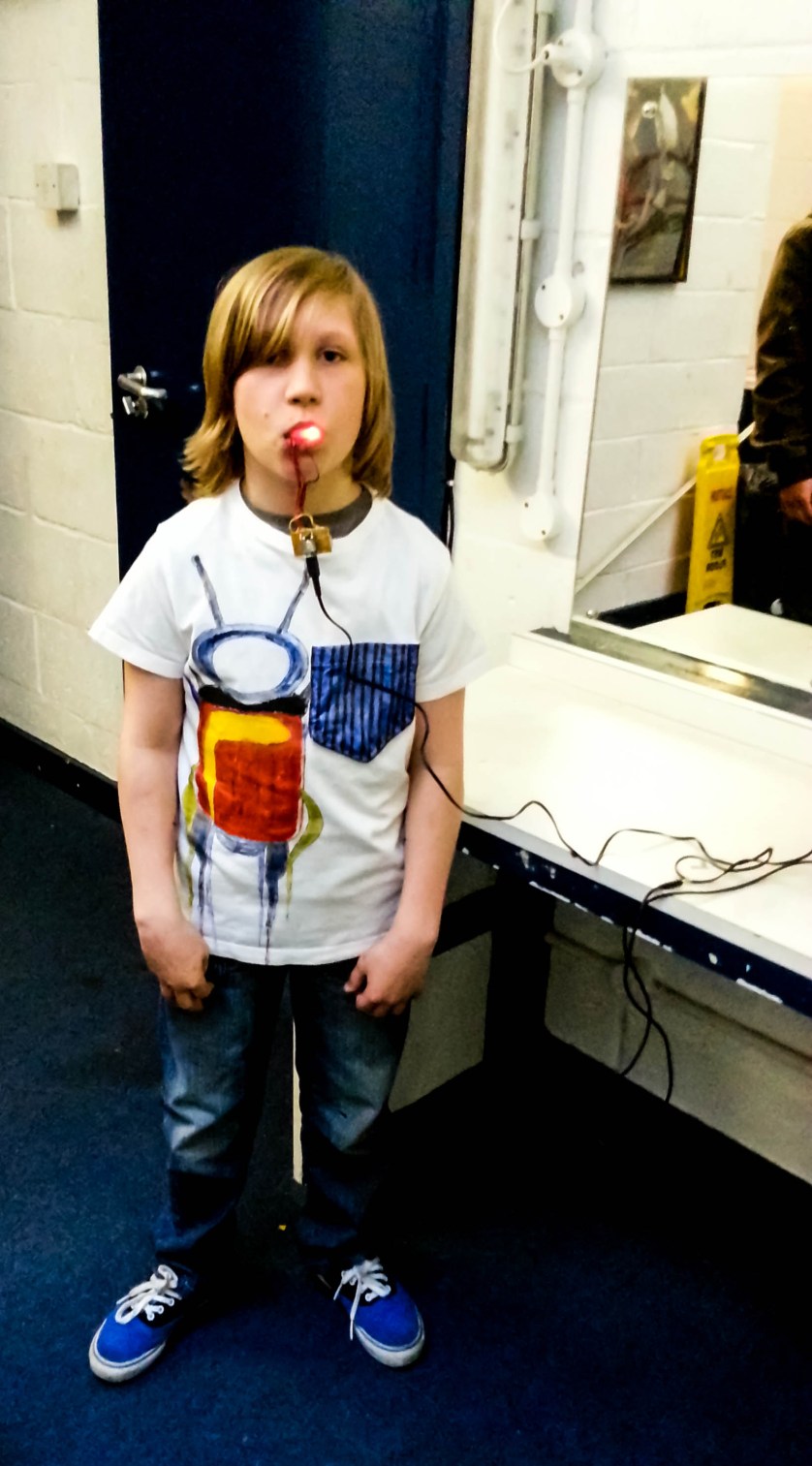 It is important to recharge your actors and drones.

The weird thing is that this year, during the writing process, we thought we’d come up with something really straight forward. After brainstorming around 20 ideas, we settled on idea number 21 which appeared to plop in out of nowhere and we were even really proud that the finished script sat around the four-pages mark. At the standard rule of one-minute-per-page, this meant we would be happily under the five minute time limit. More than anything, it made a refreshing change from the forty page monstrosities that we’ve turned out in the past because one of the writers went rogue and tried to write a TV pilot instead (and I regret nothing).

Despite this we ended up with a twisted-mutated monster and an electricity-shooting robot, giving us some heavy physical effects to pull off as well as some heavy digital effects as well. In a 48 hour window, you’re probably better off picking one, especially when beyond not showering for a few days, none of you have really tried pulling off a monster effect before.

The windows within the 48 hour window

With most filming projects and projects in general, there are plenty of nested time dependencies alongside the the over arching looming deadline. In our case, we had a lot of time limitations in terms of actor and location availability as we were filming in an arts centre that was still very much in operation. 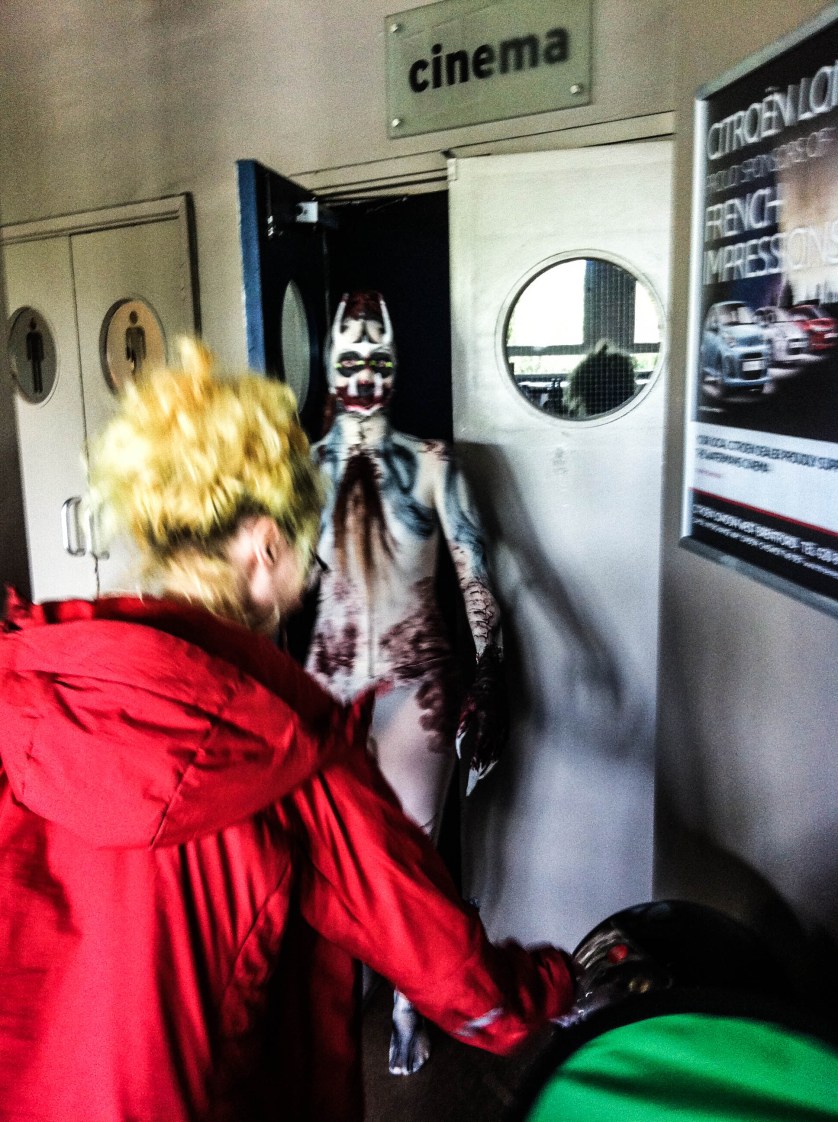 With a church group using the theatre in the morning, a children’s birthday party set to invade our current basecamp studio room in the afternoon and the centre cinema’s scheduled showing of the Lego Movie lurching ever closer, we were kept on our toes moving from place to place and generally working around the real world. How we managed to avoid traumatising the group of six-year-olds with our monster walking up and down the stairs too and from the cinema I do not know, or at least did not notice. It is possible that we were responsible for a couple of quiet mental scars after all. 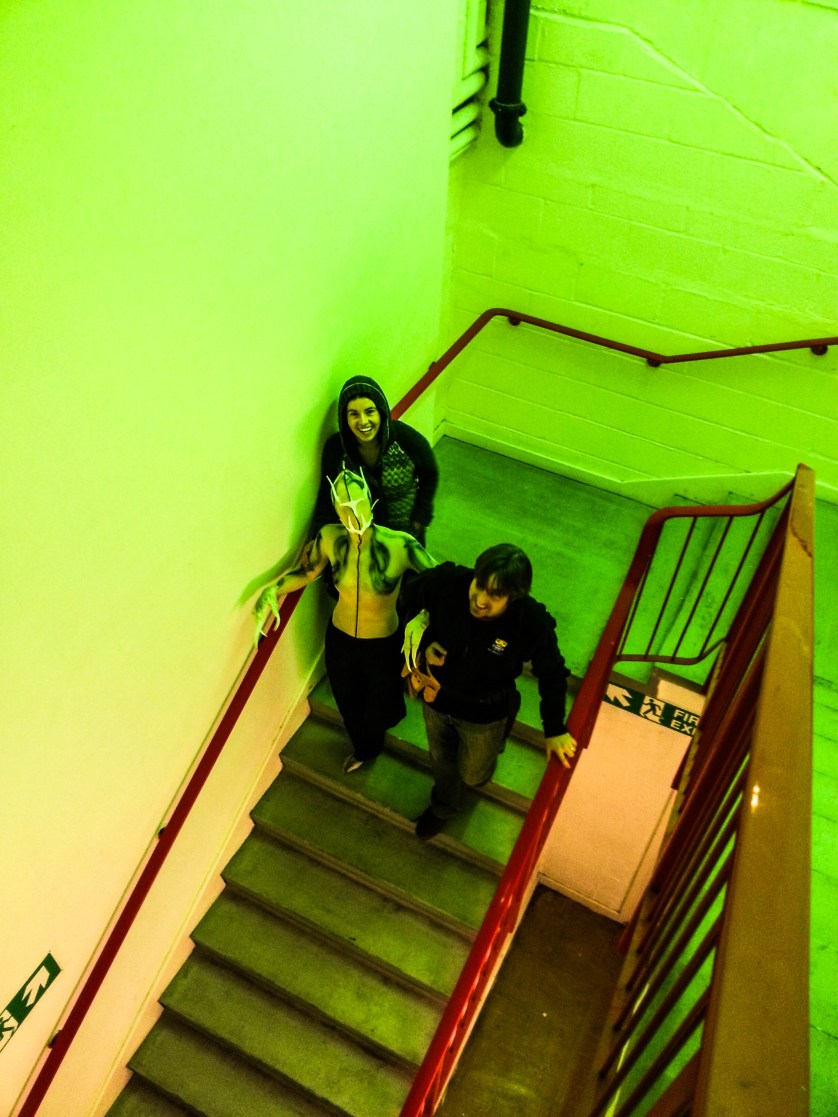 The Second AD, FX Artist and Monster make a break for it

All good films are made with hefty constraints imposed on them. I’m a firm believer that creativity is born in the fires of constraint and the more pain you go through on a project, the more likely it is to be of a solid quality. The pain-to-gain ratio on Lead Time was definitely evident with the quantity of chaos that we had to deal with over the  course of the weekend. 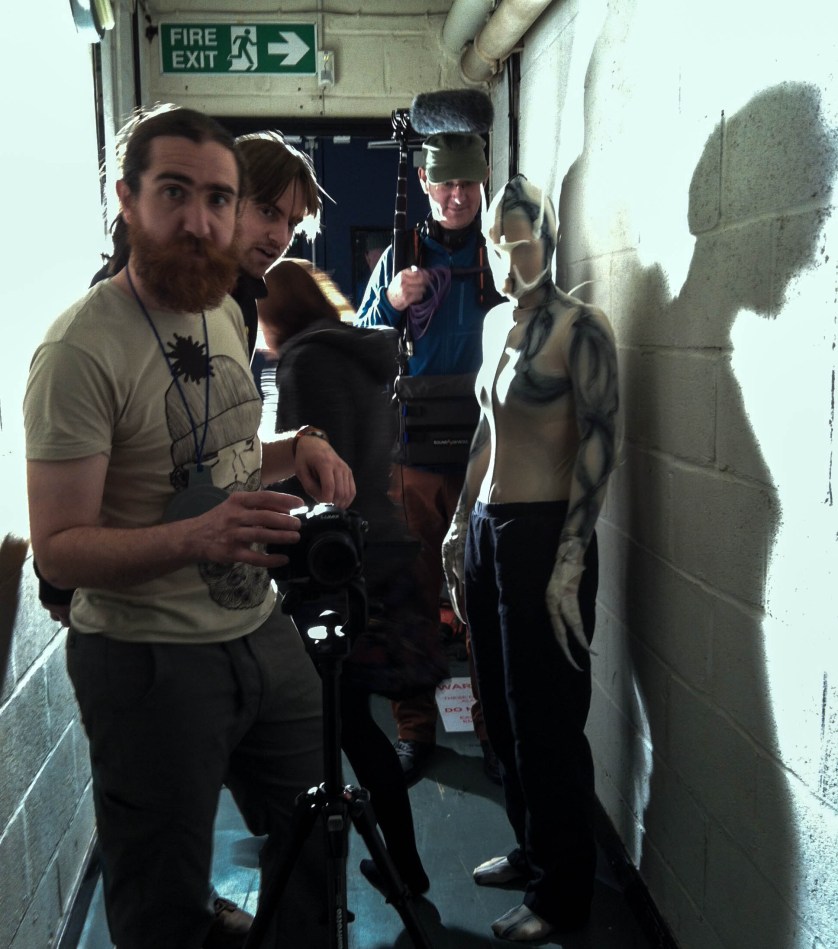 Nothing to see here Mister

Question: What do you get if you put 15 creative people in an enclosed space and stop them from sleeping?

Answer: A crime scene. Or at least that’s what should happen. 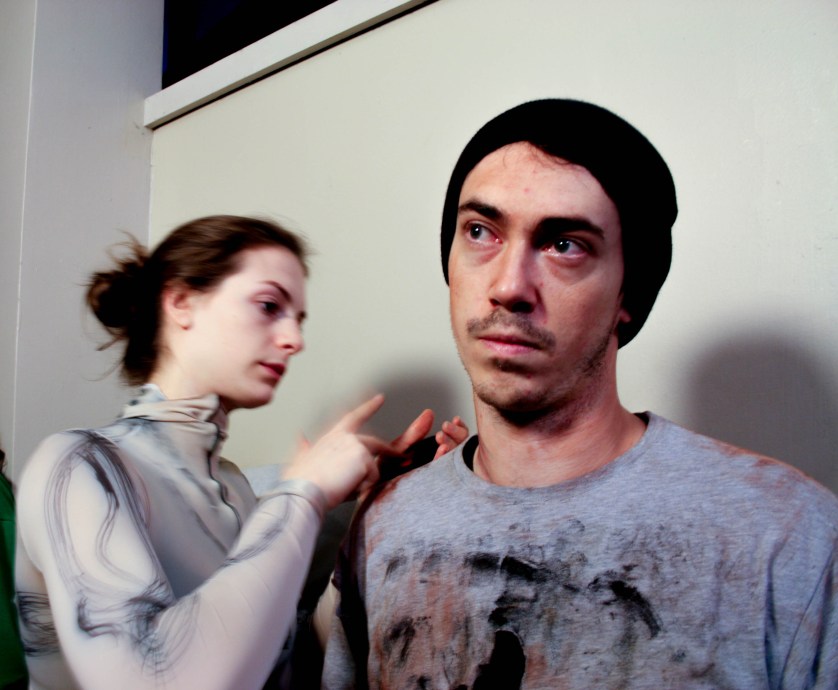 Actor gets covered in blood by Monster. Looks traumatised.

I’m not sure if it is just the critical mass of experience that we’ve built up, the fact that we were all working on something that we thought was bleeding cool, or me living in a rose-tinted world and being oblivious to issues around me, but this time round no such drama occurred.

Normally some kind of meltdown will strike, often due to not inserting the right amount of food or sleep into critical crew members, but this time things felt incredibly civilised. Some of us even showered, which is an unparalleled luxury. 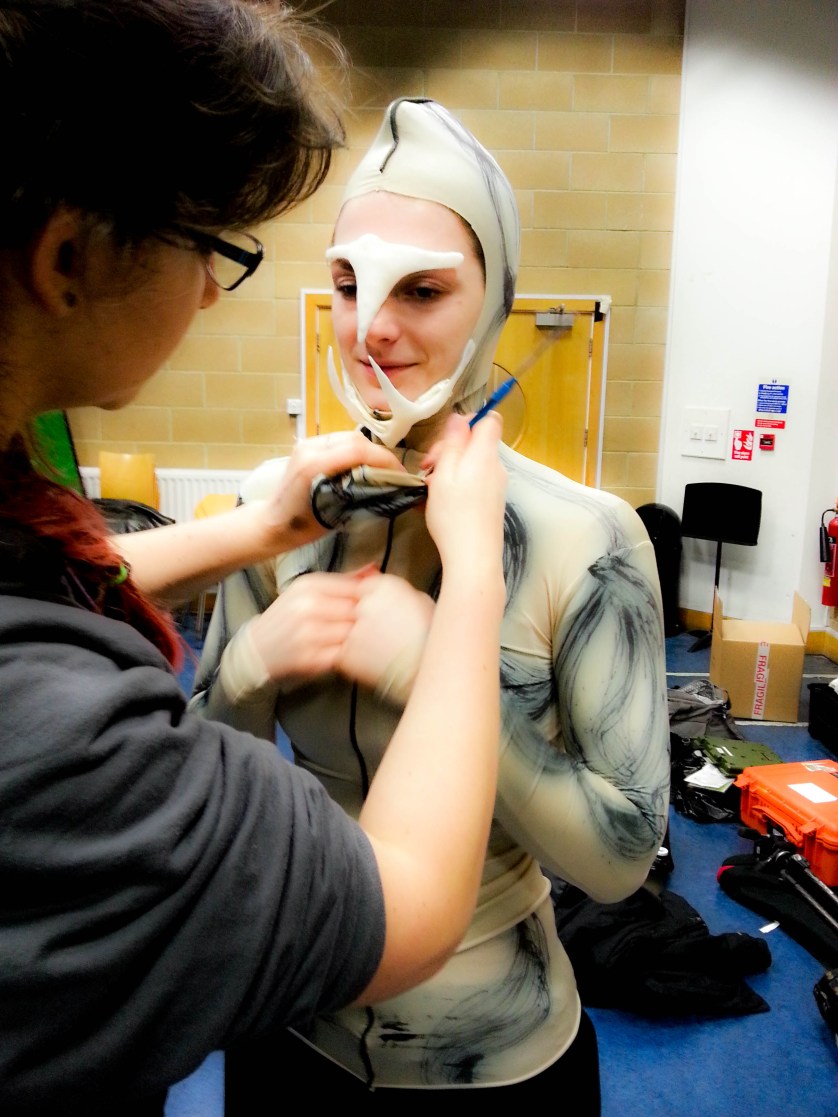 There were apparently a couple of hairy moments where it looked like everything was going to fall apart that happened whilst I was asleep, but there always are. I faintly remember awakening from my four-hour slumber (another luxury) and casually walking to the bathroom to brush my teeth whilst general filming preparation chaos was going off around me, but after that initial flurry, things calmed down to a much more manageable flurry.

I’m not even sure why everyone was in a generally positive mood, but it could just be familiarity. If you are making films with a crew, getting to know the crew you’re working with is incredibly useful and a loosely coherent group of us have been doing this for about six or seven years now.  We know how to deal with each other’s quirks and we know how to handle ourselves in the film-making situation.

We’ve also noticed particular quirks and phrases that come up every time we do any filming and are on the verge of having a kind of swear jar for anyone suggesting that we cover something in a montage or that we fix something in post. Lead Time was no different and had the other popular choice of arguing about the criteria – we did spend a while discussing whether it should be ‘lee-d time’ or ‘led time’. 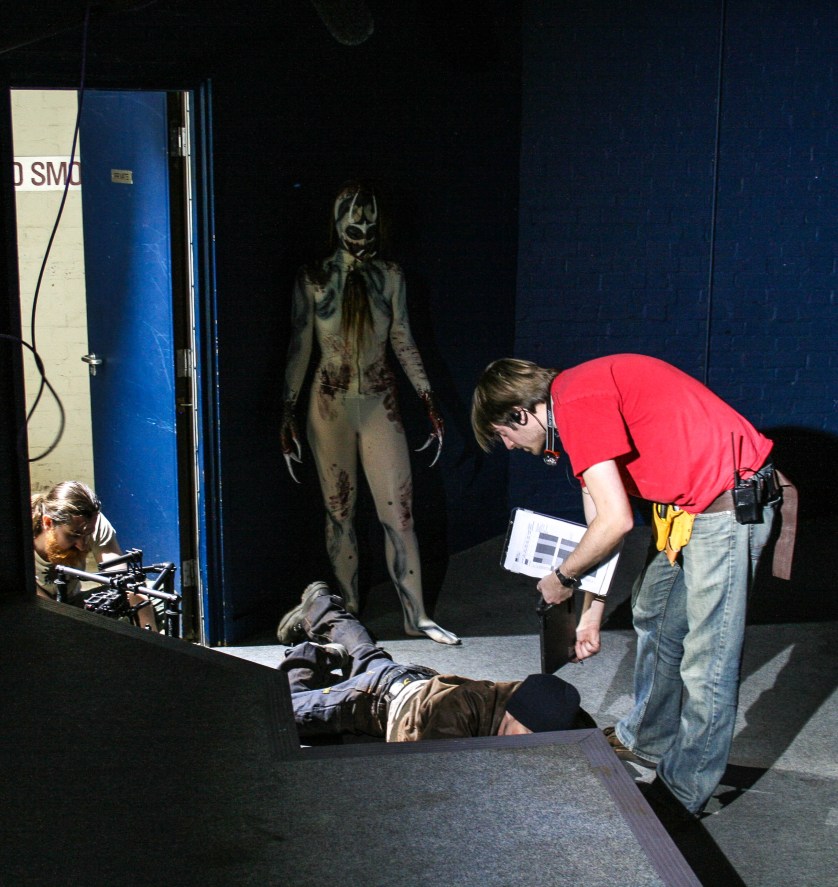 A couple of years ago I began seriously questioning how much I was getting out of film challenges and I suspect I wasn’t the only one. There was talk of us doing more planned and less break-neck-speed projects over weekends at some point and we may do that again.  But as I was watching the finished film with the mountain of kit around me and saw the perfect blend of physical and digital effects thanks to a leaf blower and some digital lightning sorcery at the climax of our film, I came to the conclusion that there is definitely value in these film challenges and angry pigs could not hold me back from doing another. Morag Hickman and Magda Durka decide to have a monster together.

If you want to make films, you should absolutely do a film challenge, even if you have a small crew. Nothing gets something done more effectively than a tight deadline and nothing tests your capabilities like trying to channel your ambition into a finished project within a weekend. The outcome won’t always be good and between the Tortoisebutler bunch we’ve got a few duds, but the rate at which you improve is significant. 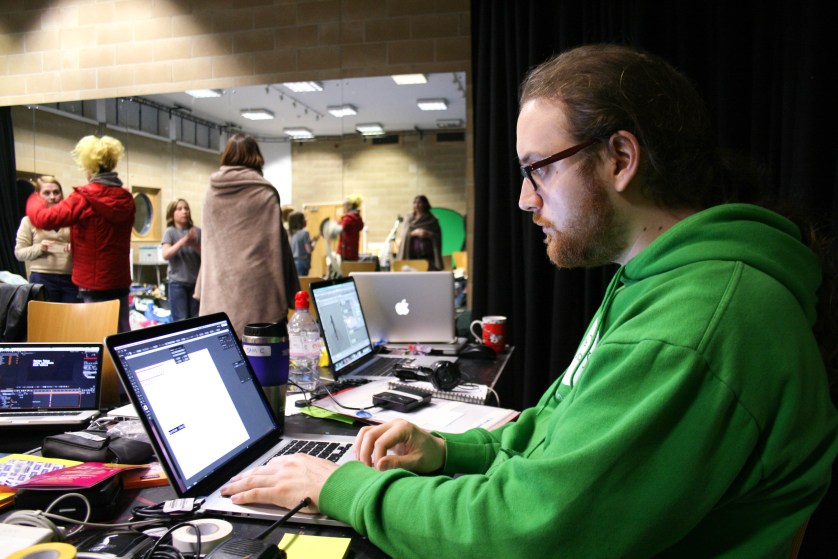 Sam Cook, Ingesting for the team!

Film challenges can be surreal as well as a way of meeting interesting people. Experiences whilst filming can creep you out, but no matter what happens, at the end of the 48 hours you have something to show for it and an experience you are unlikely to forget in a hurry.

After the Lead Time weekend, I felt increasingly in awe of the rest of the Tortoisebutler crew. They frequently leave me feeling like an idiot-hanger-on as I lurk around with a clipboard and wonder where I left the clapper-board and I’m starting to feel that there is actually no limit on what we could achieve. I’m already looking forward to next year’s challenge and am dangerously inspired to push for another project before then. Same time next year then?

As for next year, maybe we’ll make that spaceship…with a time travelling robot monster of course.

David Hing is a Writer, Runner and Optimist.   He is regarded by the Tortoisebutler Team as a cross between a Panacea and a Good Luck Charm.  Attempts are ongoing to find a way of cloning and shrinking him so he can be kept on a keyring.

Lead Time is our entry for the 2014 Sci Fi London 48 Film Challenge.

We were going to make a whimsical slice of futuristic life requiring almost no effects and achievable lighting and camera work.  Somehow that turned into “Lets Make a Monster movie!!!!!”.  It was an idea that every single person immediately latched onto and fell in love with.  That should have been the first sign of trouble.

Everything was made from scratch including a frankly disturbing monster costume our prosthetics and costume ladies (Morag, Magda and Gemma) made out of stocking, thermoplastic, a dead wig and a rather wonderful actress.

We definitely bit off far more than we had expected to chew and we’re proud of it. Featuring stellar performances from Mat McKay and introducing Zack Kebell, we hope you enjoy Leadtime as much as we enjoyed making it.

Prop: headset ear/headphones which a character takes off

Dialogue: “it’s naturally bitter so obviously… I thought of you first” (This was CROWBARRED in, with a CROWBAR)